The Fringe is back! 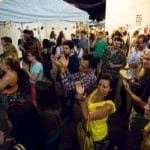 According to the festival website:  “The Toronto Fringe is part of the “Fringe movement” – a worldwide network of indie theatre festivals. As the name suggests, the movement is about celebrating under-represented voices and those on the margins of the performing arts world. It’s a festival where anyone can put on any show, without having to pass through a jury – where theatre students can mount their first production outside of school, where emerging artists can get their big break, and where established artists can test out new work. It’s a festival where audiences come for the adventure and the community as much as for the plays themselves.”

What are you looking for?